God gave me this idea a few weeks ago, but I had no real direction of where I thought it would go. I was driving home from work when the phrase about healthy eating, “are you fighting or feeding the disease”, came to mind. That’s when it popped into my head…am I fighting sin or fueling sin. Just like many diseases, sin can disrupt our lives and break us down.

It wasn’t until last night as I was laying on my son’s bedroom floor beside his crib listening to him cry, which I felt like he had done non-stop for the past 2 days, did I realize I had been fueling sin for the past two days.

Starting Saturday morning, Samuel had been testing beyond my patience’s limits. Hitting, yelling, and throwing were just a few of his behaviors over the past two days. All of which are fairly out of character for him. But instead of evaluating his behaviors, I instantly became overwhelmed, impatient, anxious, and agitated. Fueling sin into my life.

Let me share a verse with you : 1 John 3:4 (NIV) “Everyone who sins breaks the law; in fact, sin is lawlessness”. Okay, so I didn’t commit murder this weekend or engage in adultery, you know those “big” sins we often think about when it comes to sinning. But let me share another verse with you: John 13: 34 (NIV) “A new command I give you: Love one another. As I have loved you, so you must love one another.” NO, I didn’t stop loving my son this weekend, but let me share one more verse with you : 1 Corinthians 13:4 “Love is patient, love is kind…”

Not a whole lot about me this weekend was patient or kind. I may have been impatient with Samuel, but I was then unkind to others. I subconsciously probably recognized that I wouldn’t want to be unkind to Samuel, the kid was just being a toddler, so that was projected onto others. Like my poor sweet husband, who could do nothing right this weekend or the man that I shot daggers at as I passed him because he wasn’t driving fast enough for me. Like how could he not know I was running late for church, gosh. [insert massive eye rolls]. oh wait…

You see the enemy was loving every moment of my behaviors this weekend. He doesn’t want us to prosper. He uses those moments to sneak into our lives, fueling sin. Twisting my thoughts leads to negative behaviors; the enemy had a hold of me (1 Peter 5:8). I was not aligned with God’s will. And the kicker of it all…by the end of the day on Sunday, Samuel had a runny nose and felt a tad warm. He likely has started to develop the cold I just got over. A reason for his behaviors…

And here’s where I went wrong. Never once over the weekend did I reach out to God and ask for guidance. I didn’t pray for patience. I didn’t question my son’s out of the norm behaviors, I did not do one thing to fight sin. I welcomed sin. And like an unwanted house guest, sin waltzed right into my weekend leaving me feeling drained, defeated, and guilty.

But there is good news…I have grace. I have the grace of God, but I also need to show myself grace (Acts 15:11). Beating myself up for my behaviors won’t align me more with God. If anything, it will only allow more sin to enter, because in reality, beating myself up is exactly where the enemy would want me. But that doesn’t give me a free pass on my behaviors.

So I have to come up with a plan. How am I going to be better equipped to fight sin in the future? One thing I didn’t do last week that I have to believe played a factor to so easily fueling sin…I didn’t stick the Word.  I had been sick and chose sleep over getting up just an extra few minutes to read my devotions, but then was lackadaisical with taking time throughout the day to read.  I probably needed the extra sleep, but then I only skimmed my readings. I didn’t really mediate on what I was reading.

I wasn’t aware of my emotions. Nor did I implement self-care as I should, so I am often feeling drained and exhausted, which just makes me more emotional. Again, I didn’t pray as I should. And I certainly looked to the world for answers, not the Lord (Romans 12:2).

While I will not allow myself to dwell on my behaviors from this past weekend, I do have to question…had I been fighting sin, what kind of weekend would I have had?

So have you been in a situation that you later realized that you were only fueling sin instead of fighting sin? What’s your plan to fight sin in the future? 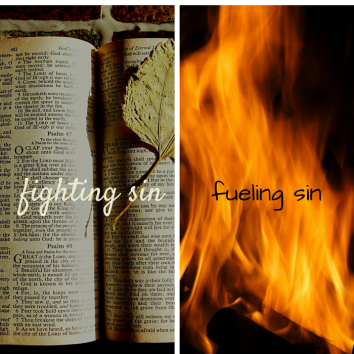 View all posts by mysongbuthisstory